There’s plenty of interest in the garden now and here’s a selection of a few plants in flower and looking great at the moment. 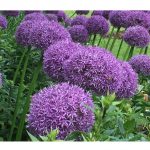 Allium ‘Globemaster’
Alliums, are grown for their showy flower heads, which come in wide range of sizes and shades of blue, purple, white and yellow. They have densely packed umbels of deep violet, star-shaped flowers which appear in early summer. This spectacular giant mauve globe allium follows on from Allium hollandicum ‘Purple Sensation’ in its flowering season. 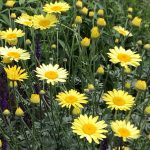 Anthemis tinctoria ‘E.C. Buxton’
This cheerful, long-flowering perennial will lift a sunny well-drained border. It has pretty, lemon-yellow daisy-like flowers which appear throughout the summer above finely cut aromatic mid-green leaves. It also has been awarded the RHS Award of Garden merit. 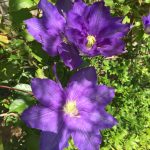 Clematis
There is a Clematis for every aspect and situation. It’s a versatile plant that can be grown on pergolas, walls, in containers of left to scramble through trees and shrubs. Keep the base of the plant and the roots cool and shaded by either positioning other plants, or placing a layer of flat stones at the base. 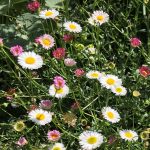 Erigeron karvinskianus
This is a low growing perennial which has masses of small daisies with yellow centres that emerge white then turn pink, giving this plant an unusual two-tone effect. It will flower throughout the summer and quickly spread throughout the border, often self-seeding readily. It is extremely versatile, being happy both in sun or partial shade. It has been awarded the RHS Award of Garden Merit. 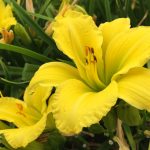 Hemerocallis
This is Hemerocallis Green Flutter, also known as the Daylily as its flowers only last a day. But don’t worry, it bears a succession of canary yellow reflexed petals with slightly frilly edges during the summer months. 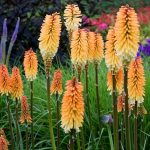 Kniphofias
Tall bright and imposing, Kniphofias lend height, vibrancy and drama to any garden. Originally from South Africa, the elegant, torch-like flowers of Kniphofia make vertical accents in a sunny border and look particularly good as an exotic scheme based on ‘hot’ colours. Kniphofia rooperi is a fantastic variety at this time of year as it continues flowering well into the autumn. It also has been awarded the RHS Award of Garden merit. 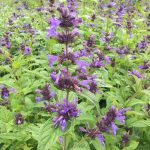 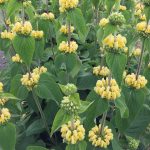 Phlomis russeliana
This is just starting to come into flower in my garden and is pretty much guaranteed to still be flowering for months to come. It has whorls of hooded, pale yellow flowers which appear at intervals on tall, erect stems. It’s also worth leaving the flowers on during winter as they provide structure and look great with a dusting of frost. 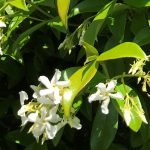 Trachelospermum jasminoides
This attractive woody, evergreen climber has rich dark green leaves that can turn a bronze-red colour in winter. It has clusters of highly fragrant, pure white flowers that are quite intoxicating, especially as the evening draws in. I wouldn’t be without it. 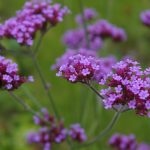 Verbena bonariensis
This flowers over a long period and will add height without becoming too overbearing. The flowers appear in small clusters, adding splashes of colour and this creates a lightness which is very appealing. The flowers will attract bees, butterflies and moths, so they are great in a wildlife garden.