Chelsea chop
The Chelsea chop (so called because it is usually carried out at the end of May, coinciding with the RHS Chelsea Flower Show) is a useful technique that helps control the size, shape and flowering time of certain summer-flowering plants. Late May or early June is the perfect time to do it.

Plants that respond well to the Chelsea chop include:

Many other summer and autumn-flowering perennials can be treated similarly. The degree of cutting back is specific to each species but the closer to flowering time you prune, the greater the delay in flowering. Doing the ‘Chelsea chop’ can delay the flowering of perennials by four to six weeks. You can either prune all the stems on a clump, which delays all the flowers, or just half of them, which spreads the plant’s flowering over a longer period. This can have some positive results:

This happens because the removal of the top shoots enables the side shoots to branch out (the top shoots would normally inhibit the side shoots by producing hormones in a process called apical dominance). Using this method, along with regular feeding and watering, ensures beds and borders look tidy throughout summer.

To carry out the Chelsea chop:

Use sharp, clean secateurs to cut back the stems of perennials by one third or a half, making a sloping cut just above a leaf joint.
If you have several clumps of one plant, try cutting back a few, but leaving others. This will prolong the overall flowering time
Another method is to cut half the stems back at the front of the clump which will extend the season of flowering rather than delay it.

Here’s an example of a Phlox paniculata that I cut back half of the foliage in late May this year: 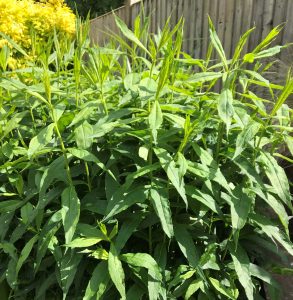 Phlox paniculata prior to carrying out the Chelsea chop 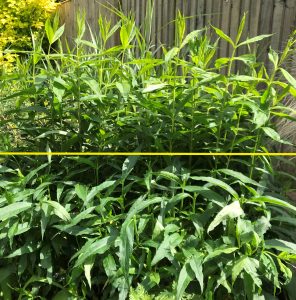 Phlox paniculata after carrying out the Chelsea chop 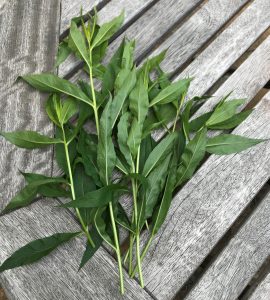 Phlox paniculata cut stems after carrying out the Chelsea chop